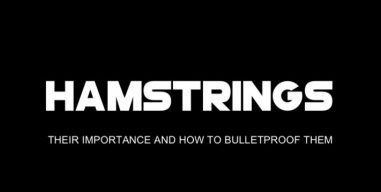 THEIR IMPORTANCE AND HOW TO BULLETPROOF THEM

Hamstring injuries are quite common in sports and in particular GAA. This is due to the fact that the athletes have not been adequately prepared for the demands of the sport.

The Hamstrings and Glutes are extremely important muscles. Their training and development are essential for improving speed and injury prevention. Increasing horizontal force and power production are key to improving speed. High performance sprinters and athletes tend to have shorter ground contact times than slower sprinters and athletes. The ability to apply force very quickly is advantageous to greater speed.

The Hamstrings and Glutes are however most often overlooked, under trained and under developed since they are behind the athlete and cannot be seen in the mirror. By increasing the amount of hamstring and glute work in your training you will significantly improve your sprint times, reaction times and make you a more dynamic athlete on the field. Your focus must shift to building powerful, bulletproof hamstrings because these are the muscles primarily responsible for propelling you down the field. 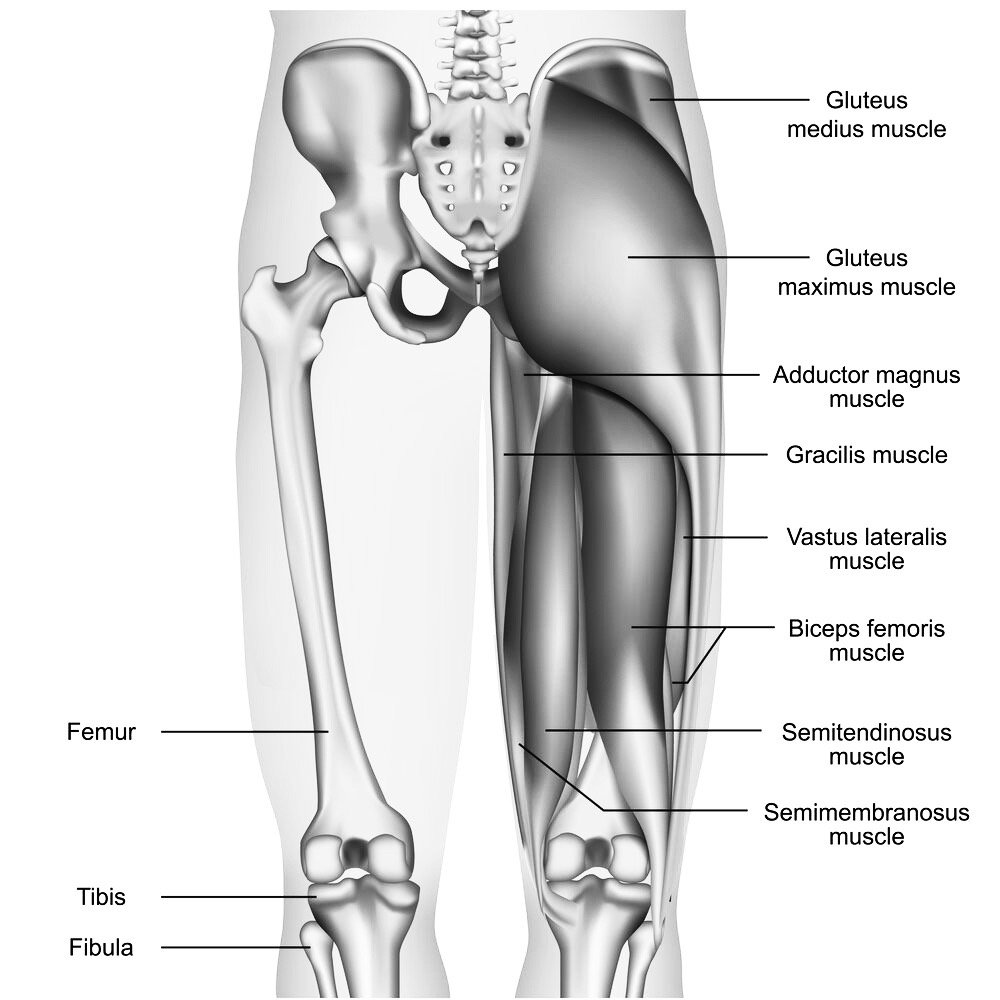 EXERTING FORCE AGAINST THE GROUND

Fast sprinting is a combination of pushing and pulling. When sprinting, the heel is drawn up to the hip, the knee is lifted, then the foot is driven down using the hamstrings and glutes. As the foot contacts the ground, the athlete pulls themselves forward and repeats the cycle. The strength of the hamstrings and glutes will have an effect on the ability of an athlete to exert force against the ground and pull themselves forward during the sprinting motion.

WHY HAMSTRINGS NEED TO BE BULLETPROOFED

The hamstrings are responsible for bending your knees. If they’re strong, you can jump high, run fast and accelerate with explosive power. With well-developed hamstrings, you can maintain good posture and prevent leg injuries.

The hamstrings in particular are frequently injured during sprinting. This is due to the nature of the sprinting motion itself. As the heel is brought up to the hip, the knee is lifted up and the heel begins to uncouple from the hip before it is driven down towards the ground. This uncoupling happens very quickly. As the heel is uncoupled from the hips, the hamstrings are thought to act as a brake on the heel. This in turn keeps your knee from hyperextending every time you sprint.

This braking action is an eccentric contraction. This braking is what causes many of the injuries experienced by athletes while sprinting. Therefore, this emphatically reinforces the need to make the hamstrings stronger. Strong hamstrings help with improving performance and preventing hamstring injuries.

Both the glutes and the hamstrings play a role in other injuries. The glute medius is thought to contribute to patella pain, causing a rotation at the hip that loads the knee inappropriately. The hamstrings are also important for preventing non-contact ACL tears. A lack of hamstring strength leads to a valgus drop (knock kneed), which increases an athlete’s risks of an ACL tear.

The hamstrings and glutes are used extensively in GAA and all field based sports. In sport, every athlete has an athletic ready position. In this position, the athlete pushes their hips back and flexes their knees. This position lowers the centre of gravity and allows the athlete to react to different situations. Getting out of this position explosively requires strong glutes and hamstrings.

Strength training focuses on increasing force output by increasing the load or amount of weight an athlete uses while training. The speed of the lift isn’t necessarily important, just the amount of weight lifted. It’s obviously not easy to move quickly in a back squat loaded with 250KG.

Power, however, is the ability to apply force quickly. Speed and force have an inverse relationship. As the speed of a movement increases, the amount of force produced decreases.

In order to maximize power production, you must find the optimal load. An athlete should use a weight that allows for a quick movement, but also requires them to generate a large amount of force. Elite athletes and sprinters are not only able to produce a large amount of horizontal force, they are also able to do so incredibly quickly.

General recommendations suggest a load ranging from 40-60% of the athlete’s one-rep-max. This will provide a good starting point for the athlete, but every athlete and exercise variation will differ when it comes to optimal loads for power production. It takes time and patience to establish these loads but once established, the benefits are unparalled.

The RDL motion is relatively straightforward, but there are subtleties to focus on to improve the effectiveness of the lift:

If you’re using a traditional glute ham machine or GHD with a semi-spherical thigh pad, placing your knees closer to the apex of the pad will engage your hamstrings more effectively than placing your knees lower on the pad. A hybrid glute ham machine is a better option for targeting and isolating the hamstrings because it uses the knee as a pivot, which increases muscle activation.

GHRs are a great exercise because there are many variations and combinations to help you mix up training and start developing explosive posterior power immediately. Choosing your GHR combos is the exciting part. With the traditional and hybrid GHDs, try the following exercise combinations. These are arranged from beginner to advanced.

Muscles are approximately forty percent stronger during eccentric contractions (extending out during the GHD raise, muscle lengthening) than during concentric contractions (pulling yourself up, muscle shortening). Eccentric training is a great way to quickly build strength. Eccentric GHR + Reps is probably the toughest GHR variation on the list.

Initiate this movement by relaxing your hamstrings and letting your body fall toward the ground. As your knees come within a few degrees of extension, violently contract your hamstrings to catch yourself at the bottom of the movement.

Attach a band to a rack at ground level. Position a box/bench/seat enough distance away from the rack that ensures continuous tension in the band. There must be no slack in the band. Sit, place the bands around both of your heels and start with your legs in the fully extended position. Flex your knees and draw your heels towards you. Make sure your knees surpass an angle of 90 degrees. Pause slightly and return your feet to the starting position.

This is a high rep exercise meant for high volume. Ensure that the band chosen accommodates that.

Muscle spindles are proprioceptive organs that are sensitive to the rate and intensity of a stretch. When a quick stretch is detected, the hamstring muscles react by producing more force than they would during the concentric or eccentric phase of the movement. If we can work to increase the amount of power that hamstrings produce, we can increase our sprinting speed.

Power Walking with the sled is an absolute necessity for anyone who partakes speed and strength training. To build a fast and strong sprinter or jumper, we must first have an athlete use long strides with the feet close to the ground and using the heels to pull the body and sled forward. This will powerfully build the hips, glutes, hamstrings and calves.

50 metre power walks work best for sprinting and for athletes. Complete 8 rounds of 50m with heavy weight on the first day. Reduce the weight by 33% and increase the number of rounds to 10 to 15 on second day after a day in between sled workouts.

Reduce the weight to one or two 20 Kg plates for a couple warm-up trips on the third day. The first day builds absolute strength, the second day builds strength for dynamic endurance and the third day is for a warm-up or restoration, not needing a rest day prior to this.

Sled power walking will build all of the muscles in the lower body used for sprinting and jumping while increasing an athlete’s conditioning level at the same time.

Everyone stretches their hamstrings, yet the hamstrings are the most commonly pulled muscle group. So, logic would tell us that this isn’t the right way to go.

In my opinion, athletes should focus more on lengthening their hip flexors and glutes, rather than spending so much time directly stretching their hamstrings. Your hamstrings are only as strong as their support network. Once you start focusing on the supporting muscles, you will have much less hamstring tightness, hamstring pulls and lower back pain.

Athletes need to make hip flexor and glute/hip rotator mobility, stretching and soft tissue work a priority in their training sooner rather than later. The time spent will be a tremendous investment.

WHY WOULD YOU STRETCH AN ALREADY PULLED MUSCLE?

It may sound obvious, but you would be surprised the amount people that as soon as they pull a hamstring, they stretch it. If an athlete does pull their hamstring, the worst thing to do is to stretch the hamstring. Think about it; pulling a muscle means you have over-stretched it. So why would you re-stretch it once the fibers start to heal?

I would recommend that for the first couple days/weeks, it is better to stretch the hip flexors and surrounding muscles. Stretching the surrounding muscles will help alleviate the tension and constant pull that is placed on your hamstrings due to an anterior pelvic tilt.