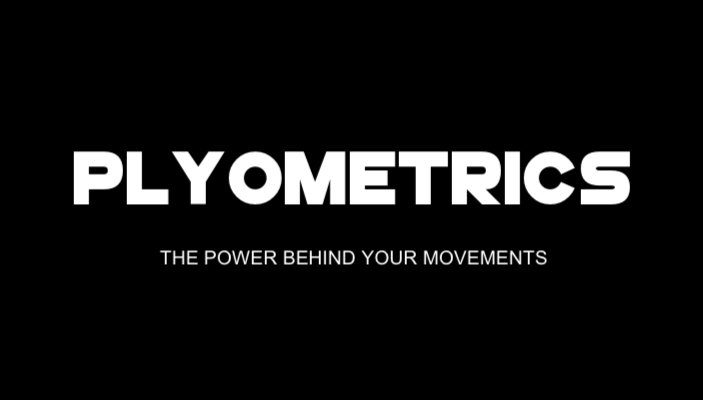 THE POWER BEHIND YOUR MOVEMENTS

Plyometrics are used to enhance performance in power sports by increasing upper and lower body power and train the nervous system to activate large muscle groups quickly when you move. Plyometric exercises involve rapid stretching of a muscle group during highly dynamic movement. This is known as the stretch-shortening cycle.

Stretching causes a stretch reflex and an elastic recoil in your muscles, which combined with a vigorous muscle contraction creates great force that overloads the muscle and increases strength and power.

The basic principle for all jumping and plyometric exercises is to absorb the shock with your arms or legs, then immediately contract your muscles. As already stated, when it comes to training for your sport, if you want to play and move explosively and powerfully, then you must train explosively and powerfully. You must execute the movements with precise, strict form. The movements must be specific, they must be explosive and they must be powerful.

Plyometrics originated in the eastern parts of the world in the 1920s though they weren’t widely recognized until the 1960s. These exercises were originally referred to as jump training. When eastern bloc countries began to have success in Olympic track and field sports during the Cold War era, the world took notice of their training methods. Athletic success is about speed, power and agility and this is exactly what plyometrics provides.

Russian’s leader in plyometric training was a scientist named Yuri Verkoshansky. His jump training exercises required Russian track and field athletes to repetitively jump in an attempt to boost the explosiveness, speed and agility of their leg and core muscles. Eastern bloc countries demanded that their athletes meet certain criteria before engaging in jump training as it severely stressed the musculoskeletal system and the neuromuscular system.

The Eastern Olympians who made use of plyometrics were so dominant in their fields due to the unique style of jump training. This early form of plyometrics didn’t just require jumping straight up into the air. It also demanded that athletes jump in different directions, often from one sturdy box to another.

Plyometric Training has three phases. The first is known as the eccentric phase. This involves rapid movements to build muscle strength.

The second is called the amortization phase. It is a very short period of inactivity where the body is allowed to rest and rejuvenate.

The third phase is known as the concentric phase. This phase consists of an explosive movement of the muscles. These three phases are repeated over and over, as quickly as possible to boost muscle power that results in increased speed and agility.

These exercises also boost speed and power by empowering the nervous system. When muscles contract, the brain communicates to the muscles by way of the neuromuscular system. If this communication occurs more quickly, muscles will be able to move much faster. The result is more speed and power.

Ideally, the athlete utilizing plyometrics training will gradually decrease the time he spends between the first phase (eccentric movements) and the third phase of concentric movements. If properly coached through their training, they will require less and less down time between rapid exercises. The result is a quicker and stronger athlete.

Before using the below plyometric exercises and combinations, please ensure that you adhere to the following essentials;

Below is a list of Plyometric exercises, both beginner and advanced, that should be used in a Speed Based Program;

In a standing position, using mainly your calf muscles with full ankle extension, jump rapidly in place. Repeat for 10 reps.

Similar to calf jumps, except you bend your knees and squat in between jumps. Jump up and drive your arms upwards. Repeat for 5-10 reps.

Lateral movement, stand with your weight on the inside part of your feet. Drive off your Left leg and swing both arms to the Right, then immediately drive with the Right leg to the left. Move as quickly as possible. Repeat 5 reps each leg.

From a standing position, bend your knees and bring your hands below your waist, then hop as far as you can on one leg, extending fully with your ankles, knees, hips and arms. Land on same leg from which you took off and repeat with the other leg and finish on the first leg.

Place 3 to 5 hurdles approx. 3 feet apart. Hop over the hurdles as quickly as possible using both legs. Minimize foot contact with the ground and stay on the balls of your feet.

Step off the balls of your feet, alternate Left then Right (explosively) moving forward.

These are similar to lateral bounding. The difference is you hop on the same foot laterally and forward for a specified distance.

Standing on top of a Plyo box, lead one leg forward, lean your body forward and drop down to the ground. Land softly into a half squat position with ankles flexed. The key here is to limit ground contact time. Upon landing, immediately jump forward.

Facing toward the Plyo box, half squat and explosively jump on to the box. Ensure full foot contact on the surface of the box. Upon reaching the surface, fully extend knees and hips. Step down and repeat.

Similar to box jumps, except start from the side of the box facing forward. Explosively jump laterally on to the box.

Ensure that when you are pushing a Prowler or pulling a Sled, that you have full ankle, knee and hip extension. Stay on the balls of your feet and move explosively.

Minimize foot contact with the ground upon landing and after 3 hurdle hops, Sprint forward 20 m and Repeat.

Minimize foot contact with the ground upon landing and after 3 hurdle hops, sprint laterally 5 m off your left foot and then power off your right foot and sprint 20 m forward.

Minimize foot contact with the ground upon landing and immediately half squat and explosively jump on to the box. Ensure full foot contact on the surface of the box. Upon reaching the surface, fully extend knees and hips. Step down and repeat.

Minimize foot contact with the ground upon landing and after 3 hurdle hops immediately half squat and explosively jump on to the box. Ensure full foot contact on the surface of the box. Upon reaching the surface, fully extend knees and hips. Step down and repeat.

Gear Changes involve sprinting forward and sprinting backward in a Shuttle Format with an immediate transfer in direction for a specified distance. Lateral movements should also be incorporated. The key is to train your footwork to react to a directional change at maximum pace. You must immediately go from sprinting forward, to the right/left, and then backward.

Start on your belly, explosively turn on to your back, and then back on to your belly. As soon as you are on your belly explode up into a sprinter starting position and sprint forward to the specified distance. Like all plyometric drills, insure every movement is precise and explosive.

To be performed on a running track or a full size pitch. For loop sprints you must walk the curve of the track or the width of the pitch and as you approach the straight or the length of the pitch, ease into a trot. Once you have covered 20-30m of the straight, launch into a full sprint for the remaining distance of the straight. As you approach the curve, slow down into a jog and then walk the curve. Repeat a specified number of times.

Explosive strength is the ability to exert maximal force in minimal time. Plyometric Training develops this.